Download A Letter to Roger About Michael Apted's 63 Up - Juicebox
0
Please log in or register to do it. 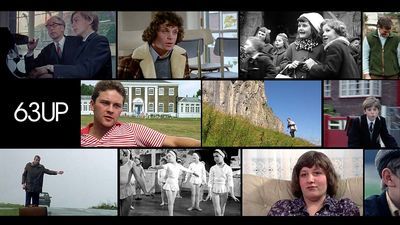 How have you been these days, Roger? It has been more than five years since you passed away in 2013, but I often cannot help but think of you whenever I encounter something great at a movie theater. At times, I wistfully reflect on how wonderful it will be if you were still here with us, but I am also sort of glad that you are not here to see the social/political ramifications of a certain orange-faced scoundrel occupying the White House at present. I do not doubt that, as a guy who was one of the most influential pundits on the Internet, you would fight and resist as much as many good Americans out there including your dear wife, Chaz.

Anyway, I am happy to tell you that I and many of our mutual friends and acquaintances have kept going as usual, and we’ve had a pretty good time on the whole thanks to heaps of superlative works during last several years. Considering how much you were supportive of new talented filmmakers, you would be delighted to see how much some of them, like Barry Jenkins, Debra Granik, and Ava DuVernay, have advanced. In addition, you would be thrilled about the emerging new talents including Trey Edward Shults, Jennifer Kent, and Robert Eggers, and you would also be excited to see how those great filmmakers including Martin Scorsese, Hirokazu Kore-eda, Alfonso Cuarón, and Agnès Varda have kept going as usual. Though, as you probably know already, Varda sadly died several months ago.

This year, I have watched a number of various fantastic works which will definitely be included in my upcoming annual list, and the one about which I particularly want to talk to you is Michael Apted’s new documentary film “63 Up,” the latest entry of the Up Series which happened to be broadcast on a South Korea education TV channel during October 28-30th. In a poignant scene in Steve James’ documentary film “Life Itself” (2014), which is based on your memoir of the same name, you enthusiastically watched and then reviewed “56 Up” (2012) even though your life was approaching its inevitable end, and I am sure that you would be eager to see how the human subjects of this great documentary series have lived during the last seven years.

As you know pretty well, everything began from a simple documentary project commissioned by the British Television company Granada Television, which is called ITV Granada at present. In “Seven Up!” (1964), 14 children from various socio-economic backgrounds were selected and then interviewed for examining their hopes and dreams, and the following seven documentary films, “7 Plus Seven” (1970), “21 Up” (1977), “28 Up” (1984), “35 Up” (1991), “42 Up” (1998), “49 Up” (2005), and “56 Up”, observed their respective lives step by step. As reflected by the recurring quote by Aristotle (“Give me a child until he is seven and I will show you the man”), these documentaries attempted to explore whether these kids’ different social environments could predetermine their future lives, and the results have been quite fascinating even though there’s no clear answer to the question. While some of these kids became exactly what they were expected to be from the very beginning, others became quite different from who they were once due to some unexpected changes. All of their lives are interesting to observe.

One of the more prominent members in the group is Tony, who was quite an ebullient working-class kid at the age of seven. He aspired to be a jockey, and it looked like he was really going to fulfill his dream at the age of 14 and 21, but then, after realizing that he was not that good enough to pursue the career of a professional jockey, he moved onto what would become his lifelong occupation: driving taxi. He subsequently became a family man, and “49 Up” and “56 Up” showed us how he has been fine and happy with his wife and other family members despite several setbacks including the one involved with a failed business plan in Spain.

At present, Tony is as talky and lively as before in front of the camera, though he has been more aware of the approaching end of the life as he knows. Mainly due to Uber, his income has been considerably decreased during last several years, and he also has to be more careful about his health condition after a blood clot was found in one of his vital organs. At least, he still enjoys his life as usual as shown from his occasional acting jobs, and I am still tickled by an amusing episode associated with Buzz Aldrin.

In the case of Neil, a middle-class boy who grew up to be a very troubled lad about whom you often worried a lot, he has been more comfortable with his life even though, as he admits at one point, he still gets quite depressed at times. It turns out that he married some woman a few years ago, but, mainly because of his mood swings, they became estranged from each other, and that led to their bitter divorce, from which he has not still completely recovered yet.

Nevertheless, it is touching to see how Neil’s life has become quite stable compared to those bleak and desperate moments in his life shown in “28 Up” and “35 Up”. As you probably remember, Roger, you feared that he would die soon. But, what do you know, he later came to bounce from the bottom of his life, thanks to an unexpected help from his fellow participant Bruce as shown from “42 Up,” and “49 Up” and “56 Up” showed us how diligently and earnestly he kept going since then. In addition to working as a district councilor, he is also the lay preacher of his local church now, and I was moved to see him getting some inner peace and solace through his sincere devotion to his parishioners, as well as God.

Although they have led less dramatic lives compared to Neil or Tony, the other human subjects in the Up series are equally fascinating to observe nonetheless. While Sue, Lynn, Jackie, a trio of plucky working-class girls in “Seven Up!”, grew up to be mothers and then grandmothers, John and Andrew, who were two of those three confident upper-class boys, also became family guys as practicing laws, respectively. In the case of Paul, one of two kids living in a charity-based boarding school, he moved to Australia along with his father after “Seven Up!”, but he has remained close to his schoolmate Symon, who became a father and then a grandfather just like Paul as going through some ups and downs in his life.

Nearly all of the original participants in “Seven Up!” appear in “63 Up.” As before, Apted asks them about their personal feelings and thoughts on the Up series, and they all give frank answers without any hesitation, while also reflecting on how much their lives have been affected by the Up series in one way or another. As I expected, he also asks for opinions on Brexit from some of them. But, as one South Korean twitter user sharply pointed out later, he asks this question only to male participants, and that is a bit disappointing, considering that Apted once said that more girls should have been chosen at the beginning.

And there is also a lingering question on the remaining time of their lives. In the case of Nick, a country boy who grew up to be a college professor studying nuclear fusion at an American university, he tells us how much he was disappointed with his longtime research becoming obsolete in the end, and he also reveals to us that he has been battling with a malignant tumor in his throat. In Lynn’s case, she died shortly after “56 Up” came out, and her death certainly signals the approaching end of the Up Series along with Nick’s possibly terminal medical condition.

Roger, I do not know how long Apted, who is currently 78, and his participants will be able to continue, but I sincerely hope that they will come back for the next entry. The end is indeed coming, but what Apted and his participants have shown us during last 55 years is extraordinary to say the least. Regardless of how it will eventually end, the Up series will remain as one of great achievements in the movie history for being, as you wrote in your Great Movies essay, “an inspired, even noble, use of the film medium.”

Yes, it is too bad that you are not here with us at present, but I am now imagining you and your best friend/colleague Gene Siskel watching and then enthusiastically discussing on “63 Up” somewhere up there. I am sure that you and Siskel appreciate it far more than I do. After all, unlike you and Siskel, I still have not lived even a single lifetime, have I?